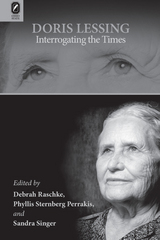 Doris Lessing: Interrogating the Timeswrestles with the ghosts that continue to haunt our most pressing twenty-first-century concerns: how to reconceive imprisoning conceptions of sexuality and gender, how to define terrorism, how to locate the personal, and how to write on race and colonialism in an ever-slippery postmodern world. This collection of essays clearly establishes Lessing’s importance as a unique and necessary voice in contemporary literature and life.
In tracing the evolution in Lessing’s representations of controversial subjects, this volume shows how new cultural and political contexts demand new solutions. Focusing on Lessing’s experiments with genre and on the ramifications of narrative itself, the collection asks readers to reformulate some of their most taken-for-granted assumptions about the contemporary world and their relation to it.
Contributors to Doris Lessing: Interrogating the Times assess Lessing’s vision of the past and its relevance for the future by revisiting texts from the beginning of her career onward while at the same time probing previous interpretations of these works. These reassessments reveal Lessing’s continued role as a gadfly who, in disrupting rigid constructions of right and wrong and of good and evil, forces her readers to move beyond “you are damned, we are saved” narratives. As rationales such as these continue to permeate global venues, Lessing’s oeuvre becomes increasingly relevant.
AUTHOR BIOGRAPHY