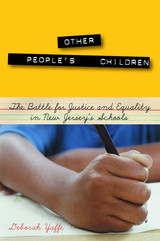 In 1981, when Raymond Abbott was a twelve-year-old sixth-grader in Camden, New Jersey, poor city school districts like his spent 25 percent less per student than the state’s wealthy suburbs did. That year, Abbott became the lead plaintiff in a landmark class-action lawsuit demanding that the state provide equal funding for rich and poor schools. Over the next twenty-five years, as the non-profit law firm representing the plaintiffs won ruling after ruling from the New Jersey Supreme Court, Abbott dropped out of school, fought a cocaine addiction, and spent time in prison before turning his life around.

Raymond Abbott’s is just one of the many human stories that have too often been forgotten in the policy battles New Jersey has waged for two generations over equal funding for rich and poor schools. Other People’s Children, the first book to tell the story of this decades-long school funding battle, interweaves the public story—an account of legal and political wrangling over laws and money—with the private stories of the inner-city children who were named plaintiffs in the state’s two school funding lawsuits, Robinson v. Cahill and Abbott v. Burke. Although these cases have shaped New Jersey’s fiscal and political landscape since the 1970s, most recently in legislative arguments over tax reform, the debate has often been too abstract and technical for most citizens to understand. Written in an accessible style and based on dozens of interviews with lawyers, politicians, and the plaintiffs themselves, Other People’s Children crystallizes the arguments and clarifies the issues for general readers.

Beyond its implications for New Jersey, this book is an important contribution to the conversations taking place in all states about the nation’s responsibility for its poor, and the role of public schools in providing equal opportunities and promising upward mobility for hard-working citizens, regardless of race or class.

AUTHOR BIOGRAPHY
DEBORAH YAFFE has worked as a reporter for the Asbury Park Press, the Jersey Journal, the Recorder of San Francisco, and the Trenton bureau of the Gannett chain. She has a B.A. from Yale University and an M.A. from Oxford University
REVIEWS
For anyone who wants to understand the Abbott decisions, this book presents the one volume where you can get the full context and story. I enthusiastically recommend it.
— William Librera, Graduate School of Education, Presidential Professor, Rutgers University