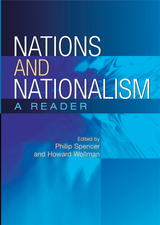 Nationalism has become a topic of wide-ranging significance and heated debate over recent years, with a huge expansion in the amount of literature available. Bringing together the best and most representative of these writings, Nations and Nationalism is an essential reader for students of political theory and related fields.

Assembled by two influential scholars, the volume includes the core, basic texts required for any course on nationalism, along with a selection of less well-known contributions that illuminates the debates. Articles and chapters cover the origins, different types, and concepts of nationalism; its relationship with race, gender, and ethnicity; the impact of globalization, post-communism, and migration; and debates about citizenship and self-determination. Classic writers such as Ernest Gellner, Anthony Smith, Benedict Anderson, and John Breuilly are represented along with younger scholars who have played a critical role in reshaping contemporary attitudes toward the topic.

Selected writings by historians, sociologists, and anthropologists supplement contributions from political scientists so that students will be able to compare theories and debates across a range of disciplines and time periods. Taken together, the chapters provide a balanced and vivid overview of how nationalism has exploded as a topic of inquiry over the last two decades and how it has interacted with other political and social forces.
AUTHOR BIOGRAPHY
Philip Spencer is the associate dean in the Faculty of Arts and Social Sciences at Kingston University (UK). He is the coauthor (with Howard Wollman) of Nationalism: A Critical Introduction.

Howard Wollman is head of the School of Psychology and Sociology at Napier University (UK).