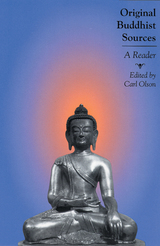 Bringing together essential materials on the origins and development of Buddhist traditions from India, Sri Lanka, Tibet, China, and Japan, this anthology provides the broadest selection of primary source Buddhist literature available to date.

The volume is divided into two major parts: Theravada and Mahayana forms of Buddhism. The first section presents selections that explore major themes in Buddhist thought such as causality, Four Noble Truths, the doctrine of non-self, nibbana, meditation, and ethics, as well as literature about monastic life and regulations, women, and hagiography.

The second part includes selections from so-called wisdom literature and texts that represent the three major schools of Mahayana Buddhism: Pure Land, Madhyamika, and Yogacara. Selections also include sources from some of the major Chinese Buddhist schools such as Hua-yen, T'ien T'ai, Pure Land, and Ch'an. Readings by thinkers such as Tantric Buddhist reformer Tsong Khapa, Pure Land leaders Honen, Shinran, and Nichiren, as well as Zen Buddhists Dogen and Hakuin provide a perspective on regional and national traditions.

In addition to the general introduction, each major section is introduced by an essay that places the selections within the context of Buddhist history. This comprehensive reader stands on its own as an indispensable anthology of original textual sources for courses in Buddhism, while also serving as a companion volume to the text The Different Paths of Buddhism: A Narrative-Historical Introduction.

AUTHOR BIOGRAPHY
CARL OLSON is a professor of religious studies at Allegheny College. His numerous books include Zen and the Art of Postmodern Philosophy: Two Paths of Liberation from the Representational Mode of Thinking and Indian Philosophers and Postmodern Thinkers: Dialogues on the Margins of Culture.
TABLE OF CONTENTS