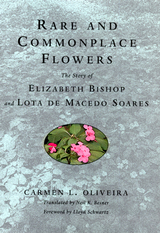 A Stonewall Honor Book of the American Library Association's Gay, Lesbian, Bisexual, and Transgendered Round Table​

Rare and Commonplace Flowers—a Brazilian bestseller—tells the story of two women. Elizabeth Bishop, the Pulitzer Prize–winning American poet, sought artistic inspiration in Brazil. There she met and fell in love with Lota de Macedo Soares, a self-trained Brazilian architect. This dual biography—brilliantly researched, and written in a lively, novelistic style—follows their relationship from 1951 to 1967, the time when the two lived together in Brazil. The fact that these two women had an intimate relationship caused an uproar when it first came to public notice.

The relationship started out happily, yet ended tragically. In 1961, Soares became increasingly obsessed with building and administering Flamengo Park, Rio de Janeiro’s equivalent to New York City’s Central Park. Though she had been the driving force behind the park’s inception, the ultimate credit that was due her was stripped away because of petty politics and chicanery. As Soares’s career declined and Bishop’s flourished, their relationship crumbled.

Rare and Commonplace Flowers is a tale of two artists and two cultures, offering unique perspectives on both women and their work. Carmen L. Oliveira provides an unparalleled level of detail and insight, due to both her familiarity with Brazil as well as her access to the country’s artistic elite, many of whom had a direct connection with Bishop and Soares. Rare pictures of the two artists and their home bring this unique story to life.