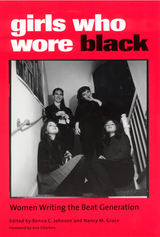 What do we know about the women who played an important role in creating the literature of the Beat Generation? Until recently, very little. Studies of the movement have effaced or excluded women writers, such as Elise Cowen, Joyce Johnson, Joanne Kyger, Hettie Jones, and Diane Di Prima, each one a significant figure of the postwar Beat communities. Equally free-thinking and innovative as the founding generation of men, women writers, fluent in Beat, hippie, and women's movement idioms, partook of and bridged two important countercultures of the American mid-century. Persistently foregrounding female experiences in the cold war 1950s and in the counterculture 1960s and in every decade up to the millennium, women writing Beat have brought nonconformity, skepticism, and gender dissent to postmodern culture and literary production in the United States and beyond.
AUTHOR BIOGRAPHY
Ronna C. Johnson is a lecturer in the departments of English and American Studies at Tufts University.

Nancy M. Grace is an associate professor in the department of English and director of the Program in Writing at The College of Wooster in Ohio. She is the author of The Feminized Male Character in Twentieth-Century Literature.
TABLE OF CONTENTS