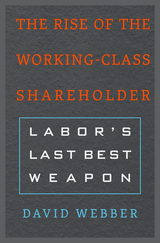 When Steven Burd, CEO of the supermarket chain Safeway, cut wages and benefits, starting a five-month strike by 59,000 unionized workers, he was confident he would win. But where traditional labor action failed, a novel approach was more successful. With the aid of the California Public Employees’ Retirement System, a $300 billion pension fund, workers led a shareholder revolt that unseated three of Burd’s boardroom allies.

In The Rise of the Working-Class Shareholder: Labor's Last Best Weapon, David Webber uses cases such as Safeway’s to shine a light on labor’s most potent remaining weapon: its multitrillion-dollar pension funds. Outmaneuvered at the bargaining table and under constant assault in Washington, state houses, and the courts, worker organizations are beginning to exercise muscle through markets. Shareholder activism has been used to divest from anti-labor companies, gun makers, and tobacco; diversify corporate boards; support Occupy Wall Street; force global warming onto the corporate agenda; create jobs; and challenge outlandish CEO pay. Webber argues that workers have found in labor’s capital a potent strategy against their exploiters. He explains the tactic’s surmountable difficulties even as he cautions that corporate interests are already working to deny labor’s access to this powerful and underused tool.

The Rise of the Working-Class Shareholder is a rare good-news story for American workers, an opportunity hiding in plain sight. Combining legal rigor with inspiring narratives of labor victory, Webber shows how workers can wield their own capital to reclaim their strength.


Webber makes a persuasive case for the potential power of the pension funds he seeks to enlist in this effort [of exerting influence on the conduct of companies in which they invest].
-- Benjamin M. Friedman New York Review of Books


Where Webber’s book shines is in demonstrating how labor’s capital already influences the working of the financial system, notably in its efforts to improve governance.
-- Owen Davis Dissent


Full of interesting bits of recent history, such as campaigns by CaPERS, AFSCME, NYC, SEIU, AFL-CIO and other union-related funds…Readers can learn much from the book on what works and what does not. The discussion of hedge funds may be particularly instructive to many.
-- James McRitchie Corporate Governance


Shareholder activism should strike most thinking conservatives as perhaps the fairest form of activism. The shareholder has earned his seat at the table; he’s bought the stock. He’s got skin in the game and an interest in the long-term health of the company. This isn’t some lawmaker or bureaucrat imposing a change from the outside, with or without an understanding of the challenges facing that business.
-- Jim Geraghty National Review


A thoughtful, informed analysis of the issues raised when union and public pension funds assert their economic power.
-- David Marcus The Deal


Webber weaves narratives of activist campaigns (pension fund administrators, union staffers, and government comptrollers are the book’s unlikely heroes) with fine-grained analysis of the relevant legal and financial concepts in accessible prose…Webber marshals a lot of information into a common sense argument that will appeal to anyone with an interest in the current labor movement.
-- Publishers Weekly


The Rise of the Working-Class Shareholder is a thoughtful, well-written, and well-researched volume. It should be read by any who are interested in learning more about capital stewardship and shareholder activism. It highlights the way that today’s labor movement can leverage its capital to serve its members, communities, and the economy. Labor cannot afford to leave any of these strategies on the table. Webber’s book provides a useful guide to how shareholder activism can and should be used.
-- Tessa Hebb ILR Review


This book could be the modern bible of the movement to harness labor’s capital for working-class interests, and it couldn’t be timelier.
-- Teresa Ghilarducci, Director, Schwartz Center for Economic Policy Analysis (SCEPA) at The New School


A riveting, thorough, and thoughtful book that is not only a fast and fun read, but contributes wonderfully to a new and ongoing conversation about inequality, dark money, and populism in the electorate.
-- Mehrsa Baradaran, author of The Color of Money: Black Banks and the Racial Wealth Gap


In The Rise of the Working-Class Shareholder, David Webber shares the inspirational story of a group of ingenious individuals who discovered a new source of power for the labor movement: shareholder activism. Webber provides a compelling new legal and policy framework for using labor’s capital to advance members’ interests both as workers and as investors saving for retirement.
-- Jennifer Taub, Vermont Law School


David H. Webber argues forcefully that the future of the American worker is inextricably bound with shareholder power. It is only when labor’s capital is fully unleashed, Webber theorizes, that American workers will then be able to win back control of their destiny. This is an important book.
-- Steven Davidoff Solomon, Berkeley Center for Law and Business

TABLE OF CONTENTS
Cover
Title Page
Copyright
Dedication
Epigraph
Contents
Preface
1. Safeway: Changing the Math
2. The New Suffragists: The Fight for Meaningful Corporate Elections
3. The Silence of the Lions: Reining in Hedge Funds and Private Equity
4. Checks and Imbalances: Saying No to the Imperial CEO
5. The People’s Lobbyists versus Private Equity
6. The New Sheriffs of Wall Street: Fighting Fraud
7. The Law of Fiduciary Duty and the Risk of Capture: In Whose Interests Should We Invest?
8. The Retirement “Crises” and the Future of Labor’s Capital
Notes
Acknowledgments
Index