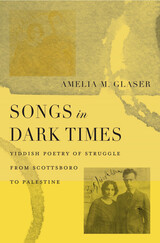 A probing reading of leftist Jewish poets who, during the interwar period, drew on the trauma of pogroms to depict the suffering of other marginalized peoples.

Between the world wars, a generation of Jewish leftist poets reached out to other embattled peoples of the earth—Palestinian Arabs, African Americans, Spanish Republicans—in Yiddish verse. Songs in Dark Times examines the richly layered meanings of this project, grounded in Jewish collective trauma but embracing a global community of the oppressed.

The long 1930s, Amelia M. Glaser proposes, gave rise to a genre of internationalist modernism in which tropes of national collective memory were rewritten as the shared experiences of many national groups. The utopian Jews of Songs in Dark Times effectively globalized the pogroms in a bold and sometimes fraught literary move that asserted continuity with anti-Arab violence and black lynching. As communists and fellow travelers, the writers also sought to integrate particular experiences of suffering into a borderless narrative of class struggle. Glaser resurrects their poems from the pages of forgotten Yiddish communist periodicals, particularly the New York–based Morgn Frayhayt (Morning Freedom) and the Soviet literary journal Royte Velt (Red World). Alongside compelling analysis, Glaser includes her own translations of ten poems previously unavailable in English, including Malka Lee’s “God’s Black Lamb,” Moyshe Nadir’s “Closer,” and Esther Shumiatsher’s “At the Border of China.”

These poets dreamed of a moment when “we” could mean “we workers” rather than “we Jews.” Songs in Dark Times takes on the beauty and difficulty of that dream, in the minds of Yiddish writers who sought to heal the world by translating pain.

REVIEWS
Songs in Dark Times arrives at just the right moment. The internationalist visions of cross-ethnic, multiracial solidarity that Glaser finds in Yiddish poetry of the 1930s are more urgent than ever in our own dark times of crisis. Her original account of the multilingual ‘passwords’ that allowed left-wing poets to connect Jewish experiences to those of other minority groups grows out of an acute sensitivity to the way literary language can forge powerful political affiliations.
-- Michael Rothberg, author of The Implicated Subject: Beyond Victims and Perpetrators


Before there was Google, there was poetry. This is a book about passwords that performed not in the technical but in the aesthetic realm: words that allowed for the crossing of the border from Jews to others who suffered. Today, when the uses and abuses of historical comparisons are so intensely debated, Glaser reminds us that thinking through analogies—translating untranslatable suffering—is inextricably bound up with empathy. Though set in the catastrophic ‘long 1930s,’ Songs in Dark Times speaks uncannily to our present moment.
-- Marci Shore, author of Caviar and Ashes: A Warsaw Generation's Life And Death In Marxism, 1918–1968


Glaser takes us on a truly international journey: from China to riot-torn Palestine to the Jim Crow American South to war-torn Spain to Soviet Ukraine. It is a compelling journey guided by an astute literary scholar with a keen sense of historical context. Intriguing, original, and acutely intelligent, Songs in Dark Times will take its place as one of the finest analyses of Yiddish literature to have been written in several decades. It is a joy to read, and I recommend it heartily.
-- Joshua M. Karlip, author of The Tragedy of a Generation: The Rise and Fall of Jewish Nationalism in Eastern Europe


Rescues long-forgotten poems from communist periodicals in the United States and Soviet Union and shows how they used Jewish ‘passwords’ in behalf of a vision of multi-ethnic and racial solidarity. Challenging but accessible, poignant and provocative, Songs in Dark Times makes an invaluable contribution to Jewish studies, Yiddish literature, and transnational political discourse.
-- Glenn C. Altschuler Jerusalem Post


Deeply probing…Glaser lifts up the work of Yiddish poets grappling with the issues of their day.
-- Eric A. Gordon People’s World