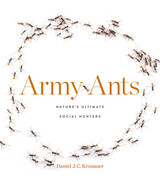 A swarm raid is one of nature’s great spectacles. In tropical rainforests around the world, army ants march in groups by the thousands to overwhelm large solitary invertebrates, along with nests of termites, wasps, and other ants. They kill and dismember their prey and carry it back to their nest, where their hungry brood devours it. They are the ultimate social hunters, demonstrating the most fascinating collective behavior.

In Army Ants we see how these insects play a crucial role in promoting and sustaining the biodiversity of tropical ecosystems. The ants help keep prey communities in check while also providing nutrition for other animals. Many species depend on army ants for survival, including a multitude of social parasites, swarm-following birds, and flies. And while their hunting behavior, and the rules that govern it, are clearly impressive, army ants display collective behavior in other ways that are no less dazzling. They build living nests, called bivouacs, using their bodies to protect the queen and larvae. The ants can even construct bridges over open space or obstacles by linking to one another using their feet. These incredible feats happen without central coordination. They are the result of local interactions—self-organization that benefits the society at large.

Through observations, stories, and stunning images, Daniel Kronauer brings these fascinating creatures to life. Army ants may be small, but their collective intelligence and impact on their environment are anything but.

REVIEWS
Never before have I read such a comprehensive, engaging history of the exploration and discovery of army ants. Wonderfully written, with superb photographs, Army Ants is a joy to read.
-- Bert Hölldobler, coauthor of The Ants and Journey to the Ants


Ants are famously ‘the little things that run the world.’ Army ants, with their million-strong colonies, showcase what happens when little things think big. As the world’s leading authority on these supremely social insects, Daniel Kronauer gives us a stunning tour of their extraordinary world.
-- Naomi E. Pierce, Hessel Professor of Biology and Curator of Lepidoptera, Museum of Comparative Zoology, Harvard University


Army ants are one of nature’s most spectacular hunters and are cornerstones for many ecological communities. This fascinating and informative book is a must-have for anyone interested in the complex behaviors of social animals.
-- Corrie Moreau, Director and Curator, Cornell University Insect Collection


This book will tell you everything you ever wanted to know about army ants. You will be mesmerized and intrigued as you read this passionate ode to the army ants and their researchers, linger over the stunning photographs, and reflect on what you have learned.
-- Raghavendra Gadagkar, author of Survival Strategies: Cooperation and Conflict in Animal Societies


A phenomenal book on army ant biology that is chock-a-block with jaw-dropping, award-winning photography…This book will show you ants in ways you have never seen them before.
-- Inquisitive Biologist


Kronauer, a master storyteller, unwraps the bivouac of the army ants to take us along the journey of their raiding swarms, the intricate bridges they construct, and the enigmatic arthropod fauna that live alongside these formidable hunters…Three decades ago, a monumental treatise and Pulitzer Prize winner, The Ants, inspired an entire generation of students to take up myrmecology. Army Ants is set to unfurl the next swarm of myrmecologists.
-- Ajay Narenda Myrmecological News Blog


Kronauer not only brings us up to date on one of the all-time greatest hits of biological exuberance and adaptation, he does so in a spellbinding way that keeps us turning the pages.
-- John T. Longino Current Biology


Beautifully produced, richly illustrated…Army ants are small-bodied denizens of the dark tropical forest understory; the rich macroimages [in] the book bring readers powerfully into their hidden realm…Readers will be enthralled by the bizarre and sometimes surprising caste of army ant intimates, including snakes, presented in stunning photographs.
-- Sean O’Donnell Quarterly Review of Biology