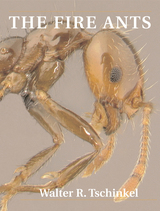 Walter Tschinkel's passion for fire ants has been stoked by over thirty years of exploring the rhythm and drama of Solenopsis invicta's biology. Since South American fire ants arrived in Mobile, Alabama, in the 1940s, they have spread to become one of the most reviled pests in the Sunbelt.

In Fire Ants Tschinkel provides not just an encyclopedic overview of S. invicta--how they found colonies, construct and defend their nests, forage and distribute food, struggle among themselves for primacy, and even relocate entire colonies--but a lively account of how research is done, how science establishes facts, and the pleasures and problems of a scientific career.

Between chapters detailed enough for experts but readily accessible to any educated reader, "interludes" provide vivid verbal images of the world of fire ants and the people who study them. Early chapters describe the several failed, and heavily politically influenced, eradication campaigns, and later ones the remarkable spread of S. invicta's "polygyne" form, in which nests harbor multiple queens and colonies reproduce by "budding." The reader learns much about ants, the practice of science, and humans' role in the fire ant's North American success.

REVIEWS
This is a wonderful book, comprehensive in its coverage of fire ant social biology, extraordinarily lucid in its description of complex topics, and beautifully synthetic in tying together the many disparate threads of evidence relevant to the discussion of each topic. The prose is concise and compact, but the wit and humor of the author penetrate even the most tedious technical parts to lighten up the text and make it a pleasure to read. The book is laced with insightful and humorous interludes that detail the tools and personalities involved in fire ant research, and covers the major topics likely to be of interest to evolutionary biologists and ecologists who study social animals, especially social insects. The Fire Ants is certain to be widely read.
-- Kenneth Ross, Professor of Entomology, University of Georgia


This book is without parallel as a thorough description of the biology of an important social insect. There are books on particular problems of social insect biology, and of course the landmark volume by Hölldobler and Wilson treats all ant biology. The Fire Ants stands out for its focus on a single species, covering the entire range of an enormous literature. It will therefore be of interest to specialists and to a more general audience who wish to learn about what is important in the ant world.
-- Joan Herbers, Dean of Biological Sciences, Department of Evolution, Ecology and Organismal Biology, The Ohio State University


I have been reading bits and pieces of the book, dipping in here and there like a chimpanzee with a twig, fishing for ants, and each time I have come up with something tasty and nutritious...My favorite ["Interlude"], an economical two-page essay called "The Porter Wedge Micrometer: Mental Health for Myrmecologists," ought to be required reading for any scientist who wants to write for the public...This brief essay is entertaining and significant, a real glimpse of what science is and how it is done by human beings, rational and un-, grappling with technique, nature and the gathering of information. This is what the public needs to know about science, not just the results presented in the driest form possible.
-- James Gorman New York Times


This book is a masterly and detailed account of some of nature's greatest opportunists, the fire ants. It deals with their phylogeny, biogeography, social organization, parasites, and foraging behavior, together with their impacts on natural ecosystems and agriculture. Walter Tschinkel's holistic approach embraces topics at the molecular level and relates them to the colony and its organization. Tschinkel has researched these ants for thirty-five years at Florida State University, Tallahassee. He and several generations of his postgraduate students have been one of the major driving forces in fire-ant studies. This body of work required the mastery of finely tuned laboratory techniques in analytical chemistry, a detailed understanding of the natural history of the ants, extended periods of uncomfortable fieldwork and getting badly stung...Tschinkel's love of and fascination with the ants shines through the often highly technical aspects of The Fire Ants. He writes with great clarity and his book should appeal to the general reader, as much as the specialist. It is well illustrated with graphs, tables, and excellent photographs.
-- Christopher O'Toole Times Literary Supplement


ABOUT THIS BOOK | REVIEWS | TOC