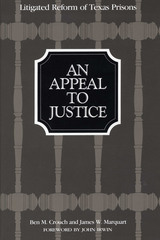 How does a prison achieve institutional order while safeguarding prisoners' rights? Since the early 1960s, prison reform advocates have aggressively used the courts to extend rights and improve life for inmates, while prison administrators have been slow to alter the status quo. Litigated reform has been the most significant force in obtaining change.

An Appeal to Justice is a critical tudy of how the Texas Department of Corrections was transformed by Ruiz v. Estelle, the most sweeping class-action suit in correctional law history. Orders from federal judge William W. Justice rapidly moved the Texas system from one of the most autonomous, isolated, and paternalistic system to a more constitutional bureaucracy. In many respects the Texas experience is a microcosm of the transformation of American corrections over the second half of the twentieth century.

This is a careful account of TDC's fearful past as a plantation system, its tumultuous litigated reform, and its subsequent efforts to balance prisoner rights and prison order. Of major importance is the detailed examination of the broad stages of the reform process (and its costs and benefits) and an intimate look at prison brutality and humanity. The authors examine the terror tactics of the inmate guards, the development of prisoner gangs and widespread violence during the reforms, and the stability that eventually emerged. They also detail the change of the guard force from a relatively small, cohesive cadre dependent on discretion, personal loyalty, and physical dominance to a larger and more fragmented security staff controlled by formal procedures.

Drawing on years of research in archival sources and on hundreds of interviews with prisoners, administrators, and staff, An Appeal to Justice is a unique basis for assessing the course and consequences of prison litigation and will be valuable reading for legislators, lawyers, judges, prison administrators, and concerned citizens, as well as prison and public policy scholars.