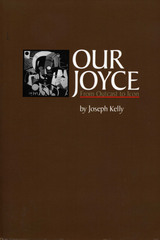 James Joyce began his literary career as an Irishman writing to protest the deplorable conditions of his native country. Today, he is an icon in a field known as "Joyce studies." Our Joyce explores this amazing transformation of a literary reputation, offering a frank look into how and for whose benefit literary reputations are constructed.

Joseph Kelly looks at five defining moments in Joyce's reputation. Before 1914, when Joyce was most in control of his own reputation, he considered himself an Irish writer speaking to the Dublin middle classes. When T. S. Eliot and Ezra Pound began promoting Joyce in 1914, however, they initiated a cult of genius that transformed Joyce into a prototype of the "egoist," a writer talking only to other writers.

This view served the purposes of Morris Ernst in the 1930s, when he defended Ulysses against obscenity charges by arguing that geniuses were incapable of obscenity and that they wrote only for elite readers. That view of Joyce solidified in Richard Ellmann's award-winning 1950s biography, which portrayed Joyce as a self-centered genius who cared little for his readers and less for the world at war around him. The biography, in turn, led to Joyce's canonization by the academy, where a "Joyce industry" now flourishes within English departments.

AUTHOR BIOGRAPHY
Joseph Kelly is Professor of English at the College of Charleston in South Carolina.
TABLE OF CONTENTS