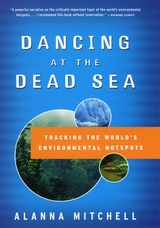 Dancing at the Dead Sea: Tracking the World's Environmental Hotspots
by Alanna Mitchell
University of Chicago Press, 2005
Cloth: 978-0-226-53200-4
One hundred and fifty years after the publication of On the Origin of Species, award-winning environmental reporter Alanna Mitchell set out to retrace the idea of evolution and grapple with the fact that a massive extinction of the planet's species was well under way. So began a three-year odyssey in which Mitchell picked up where Darwin left off, examining not just the origin but also the ultimate fate of our world.

Combining scientific curiosity with travel and adventure, Dancing at the Dead Sea takes the reader on an intimate tour through the world's environmental hotspots. Readers join Mitchell as she tracks the spectacular biodiversity of regions as extraordinary as the island of Madagascar, the rain forests of Suriname, the parched oases of Jordan, the Arctic desert of Banks Island, the volcanic crests of Iceland, and, ultimately, the Galapagos archipelago, where Darwin conducted his famous research. Along the way, Mitchell introduces us to the numerous scientists and conservationists who are working to protect these endangered places. She also chronicles the courageous efforts of everyday men and women in these regions as they try to convince governments to turn the world's hotspots into environmentally protected areas.

Ultimately, Mitchell's travels around the world compel her to ponder our shelf life as a species in the grand evolutionary scheme of the planet. She wonders what Darwin would make of the profound ecological destruction she witnesses. Is the human race suicidal? What can help our species avert extinction? Posing tough and cutting questions such as these, Dancing at the Dead Sea is a must-read for aficionados of good science writing and travel literature alike.
AUTHOR BIOGRAPHY
Alanna Mitchell is an international award-winning senior features writer at the Globe and Mail. In 2000 and 2001, the World Conservation Union and the Reuters Foundation cited her work as the best environmental reporting in North America and Oceania.
REVIEWS

“The itinerary of this winning pilgrimage is well-chosen to illustrate contemporary environmental crises.”


Introduction: Dancing at the Dead Sea
1. The Devil's Chaplain
2. In Search of Lemurs
3. Reading the Secrets of the Fossils
4. Parched Oasis
5. Sunken Graves of the High Arctic
6. Where the Rainforest Goes On Forever
7. Iceland's New Power
8. Ocean's End
Epilogue
Acknowledgments
Selected References
Index