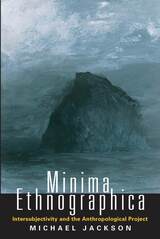 The postmodern opposition between theory and lived reality has led in part to an anthropological turn to "dialogic" or "reflexive" approaches. Michael Jackson claims these approaches are hardly radical as they still drift into such abstractions as "society" or "culture." His Minima Ethnographica proposes an existential anthropology that recognizes even abstract relationships as modalities of interpersonal life.

Written in the style of Theodor Adorno's Minima Moralia, Jackson's work shows how general ideas are always anchored in particular social events and critical concerns. Emphasizing the intersubjective encounter over objective descriptions of the whole historical and contemporary situation of a given people, he illustrates the power and originality of existential anthropology through a series of vignettes from his fieldwork in Sierra Leone and Australia. An award-winning poet, novelist, and anthropologist, Jackson offers a timely critique of conventions that dull our sense of the links between academic study and lived experience.