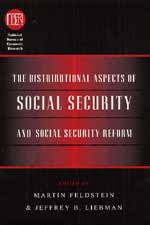 Social security is the largest and perhaps the most popular program run by the federal government. Given the projected increase in both individual life expectancy and sheer number of retirees, however, the current system faces an eventual overload. Alternative proposals have emerged, ranging from reductions in future benefits to a rise in taxrevenue to various forms of investment-based personal retirement accounts.

As this volume suggests, the distributional consequences of these proposals are substantially different and may disproportionately affect those groups who depend on social security to avoid poverty in old age. Together, these studies persuasively show that appropriately designed investment-based social security reforms can effectively reduce the long-term burden of an aging society on future taxpayers, increase the expected future income of retirees, and mitigate poverty rates among the elderly.

AUTHOR BIOGRAPHY
Martin Feldstein is the George F. Baker Professor of Economics at Harvard University, president and CEO of the National Bureau of Economic Research, and former chairman of the Council of Economic Advisers for President Reagan. He is the author and editor of many books, including International Capital Flows and Privatizing Social Security, both published by the University of Chicago Press.

Jeffrey B. Liebman is an associate professor of public policy at the John F. Kennedy School of Government at Harvard University and is a faculty research fellow of the National Bureau of Economic Research. He previously served as special assistant to President Clinton for economic policy and coordinated the administration's social security reform working group.
TABLE OF CONTENTS

2. Gauranteed Income: SSI and the Well-Being
of the Elderly Poor

3. The Impact of Social Security and Other Factors
on the Distribution of Wealth

4. Social Security and Inequality over the Life Cycle

6. Social Security's Treatment of Postwar
Americans: How Bad Can It Get?

7. The Distributional Effects of an Investment-Based
Social Security System

8. Distributional Effects in a General Equilibrium
Analysis of Social Security

9. The Economics of Bequests in Pensions and
Social Security

10. Differential Mortality and the Value of
Individual Account Retirement Annuities