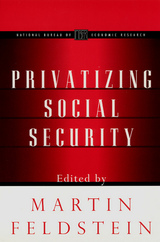 This volume represents the most important work to date on one of the pressing policy issues of the moment: the privatization of social security. Although social security is facing enormous fiscal pressure in the face of an aging population, there has been relatively little published on the fundamentals of essential reform through privatization. Privatizing Social Security fills this void by studying the methods and problems involved in shifting from the current system to one based on mandatory saving in individual accounts.

"Timely and important. . . . [Privatizing Social Security] presents a forceful case for a radical shift from the existing unfunded, pay-as-you-go single national program to a mandatory funded program with individual savings accounts. . . . An extensive analysis of how a privatized plan would work in the United States is supplemented with the experiences of five other countries that have privatized plans." —Library Journal

"[A] high-powered collection of essays by top experts in the field."—Timothy Taylor, Public Interest
TABLE OF CONTENTS