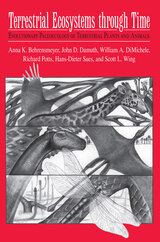 Breathtaking in scope, this is the first survey of the entire
ecological history of life on land—from the earliest traces
of terrestrial organisms over 400 million years ago to the
beginning of human agriculture. By providing myriad insights
into the unique ecological information contained in the
fossil record, it establishes a new and ambitious basis for
the study of evolutionary paleoecology of land ecosystems.

A joint undertaking of the Evolution of Terrestrial
Ecosystems Consortium at the National Museum of Natural
History, Smithsonian Institution, and twenty-six additional
researchers, this book begins with four chapters that lay out
the theoretical background and methodology of the science of
evolutionary paleoecology. Included are a comprehensive
review of the taphonomy and paleoenvironmental settings of
fossil deposits as well as guidelines for developing
ecological characterizations of extinct organisms and the
communities in which they lived. The remaining three
chapters treat the history of terrestrial ecosystems through
geological time, emphasizing how ecological interactions have
changed, the rate and tempo of ecosystem change, the role of
exogenous "forcing factors" in generating ecological change,
and the effect of ecological factors on the evolution of
biological diversity.

The six principal authors of this volume are all associated
with the Evolution of Terrestrial Ecosystems program at the
National Museum of Natural History, Smithsonian Institution.
TABLE OF CONTENTS