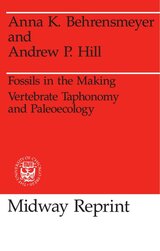 One of the first interdisciplinary discussions of taphonomy (the study of how fossil assemblages are formed) and paleoecology (the reconstruction of ancient ecosystems), this volume helped establish these relatively new disciplines. It was originally published as part of the influential Prehistoric Archeology and Ecology series.

"Taphonomy is plainly here to stay, and this book makes a first class introduction to its range and appeal."—Anthony Smith, Interdisciplinary Science Reviews
TABLE OF CONTENTS